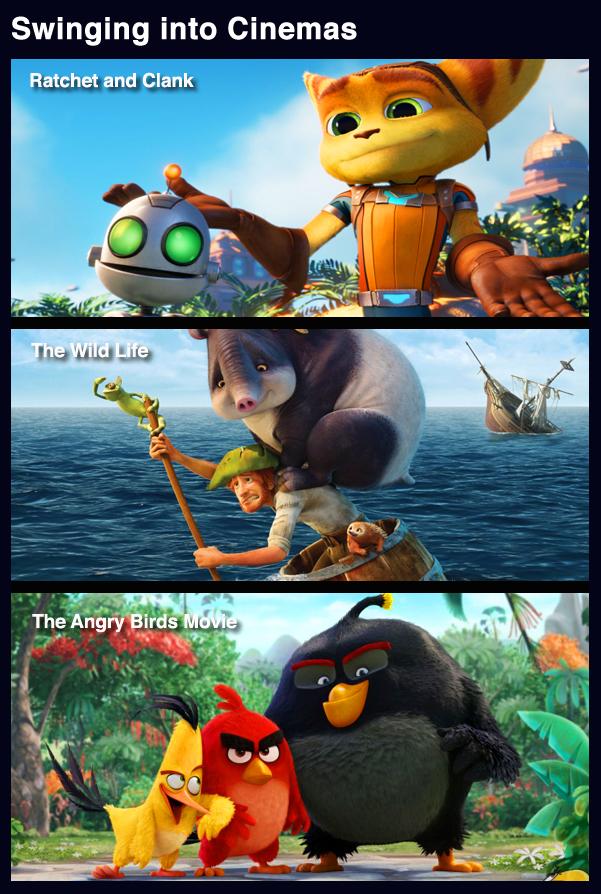 Over the next month Crafty Arty Parties is swinging into cinemas for a bundle of private screenings delivering some fantastic pre show entertainment and activities. We just can’t wait!

With so many great films coming out we  thought we would share a few of our favourites!

Unlikely heroes Ratchet and Clank struggle to stop alien chairman Drek from destroying planets in the Solana Galaxy. When the two stumble upon a dangerous weapon capable of destroying the entire universe, they join forces  with a team of heroes called The Galactic Rangers to save the galaxy. Along the way they’ll learn about heroism, friendship, and the importance of discovering one’s own identity. Voices include Sylvester Stallone, Paul Giamatti, Bella Thorne, John Goodman and Rosario Dawson. On general release from Friday April 29th

On a tiny exotic island, Tuesday, a parrot lives with his quirky animal friends, but he can’t stop dreaming about discovering the world. After a violent storm, Tuesday and his friends find a strange creature on the beach: Robinson Crusoe. Tuesday views Crusoe as his ticket off the island and likewise, Crusoe soon realizes that the key to surviving on the island is through the help of Tuesday and the other animals. On general release from Friday 6th May

The video game phenomenon hits the big screen with this hilarious spin-off animation. How did the birds meet the pigs? We’re about to find out in this rib-tickling CGI animation. Jason Sudeikis leads the top-notch voice cast as flock leader Red, with Bill Hader as the commander of the evil porcine interlopers who arrive on the flightless birds’ island idyll, sparking all-out war. On general release from Wednesday 11th May